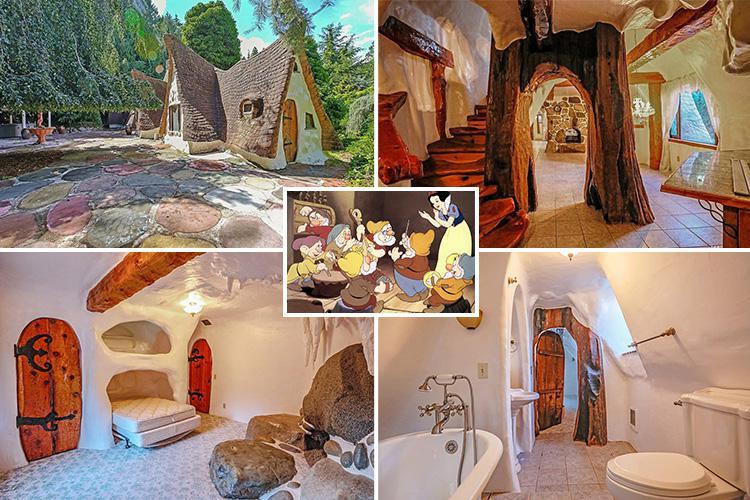 The story of Snow White and the seven dwarfs can be traced back to 1812 when the Brothers Grimm published their first tales. Snow White appeared in the first edition of the final revision of the story in 1854 at which point it took on a life of its own. Walt Disney turned the story into a movie in 1937 and to this day it is still an integral part of the Disney Empire. So, what exactly is up for sale?

Such was the love a Washington family had for Snow White and the seven dwarfs that they replicated the cottage from the story and lived there until 2005. This is not your half-hearted attempt to replicate the cottage this is a full-blown replica of an enchanted and magical home.

The cottage itself is located in Washington across 5 acres of woodland at the end of a dead-end street and gated property behind which is a whole new magical world. The total living space is 2800 ft.² and just like in the fairytale the roof is extremely high-pitched and deeply sloped – to the point where you feel as though you are there. Inside the cottage there are four bedrooms and five bathrooms and while everything is magical, replicated in great detail, it does also have an array of modern twists such as Internet connection.

If you consider that to use the Internet you must walk through the opening of a massive indoor tree trunk you will begin to get the idea. The tree trunk also serves as a route to the second floor which boasts an open loft, bath and a magical staircase. Huge hand-carved beams complement the stone walls and there is an array of rounded hand built wooden doors held up by beautifully crafted hinges.

Just like in the fairytale the cottage has a large wood stove which creates the type of deep seated heat many of us can only dream of. There is also a stereotypical fairytale kitchen fireplace upon which all meals are cooked. If we were to tell you that there are no corners in the cottage and it quite literally wraps around you, perhaps you will understand exactly what is on offer?

Somewhere along the line there had to be a modern twist on this ancient fairytale although to be honest the current owner and the previous owner have carried on the fairytale theme. The only real sign of a modern update is a hot tub/spar, patio, parking and a garden area which obviously comes with magical fruit trees. There is a treehouse with its own room and fireplace which is a perfect area to relax and chill out.

This is only the second time that the Snow White and the seven dwarfs replica cottage has been listed on the market since the 1970s. While it will probably only appeal to a small percentage of buyers, at $775,000 you are literally buying your own fairytale dwelling. We can only hope that the next buyer is able to continue the theme and build on the original foundations – as the current owners did themselves.